Virginia Tech today announced a $400 million fundraising campaign to propel Hokie sports to the forefront of the Atlantic Coast Conference, prepare generations of student-athletes for success in life, and raise the university’s profile nationwide.

“Athletics is an important part of the Virginia Tech experience, supporting the university and our local economy, and creating national visibility that engages our worldwide community of alumni, friends, and fans,” Virginia Tech President Tim Sands said while highlighting the Reach for Excellence campaign alongside Athletic Director Whit Babcock and other university leaders.

The campaign will leverage the momentum of recent successes on the field and in fundraising, such as adding about 10,000 more Hokie Club members in the past five years and opening the Student-Athlete Performance Center, thanks to a record gift. Still, leaders acknowledged that the athletics enterprise needs an infusion of revenue in order to compete at the top of the ACC. Sands, speaking from the main football team meeting room within the Merryman Athletic Complex, noted that Virginia Tech Athletics is well-positioned for future success, but must invest in that success at a level comparable to its peers.

“Whit and our roster of talented coaches are doing a great job,” Sands said. “Whit has the right long-term vision for athletics, but that vision must be powered by resources. To take Virginia Tech Athletics to the next level of competitiveness, we need to resource athletics in the top-third of the ACC and the Power Five programs. To reach that level, we are committing to enhancing support from all sources, including significant private support from this campaign.”

The budget increase will support athletics in three primary areas: facilities, coaching, and the student-athlete experience.

“This is an exciting day and the culmination of years of careful planning,” Babcock said during the Reach for Excellence announcement. “We know that our athletics program plays a central role in the student experience and the strong bond our wider community has with Virginia Tech. The past year has seen financial challenges due to COVID-19 and other factors, but we are confident in our long-term vision and our path to achieve it.

“We appreciate the university’s show of support and commitment to excellence across Hokie sports. We also appreciate all the donors who have already stepped forward to help — and the many more who will. We are all in this together. Instead of someone doing everything, we’re asking everyone to do something.”

The Reach for Excellence campaign has five main pillars, which are: 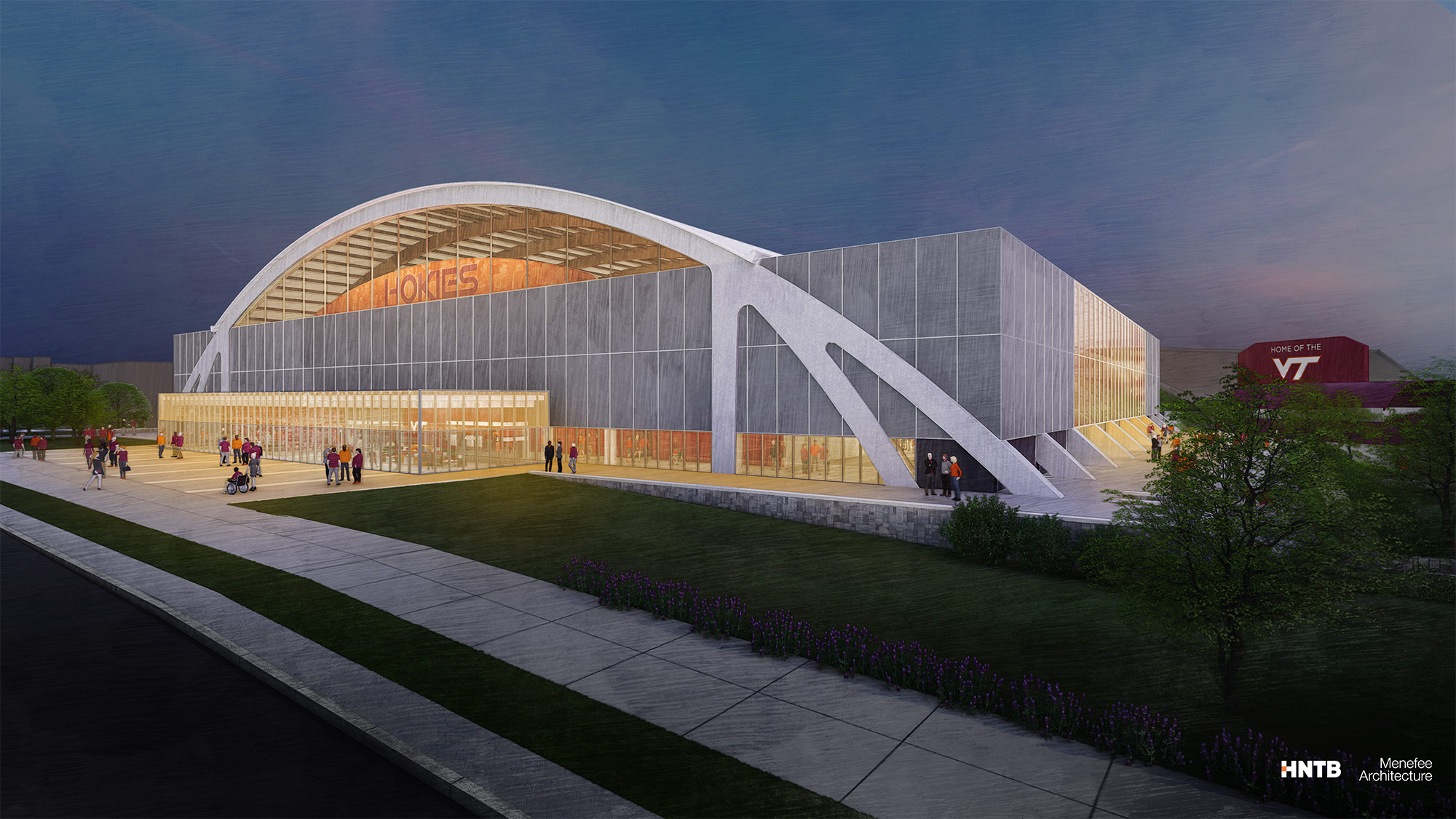 Architect's rendition of a renovated Cassell Coliseum. Cassell is the home venue for multiple Hokie sports teams, including men’s and women’s basketball, which for the first time in school history both made the NCAA Tournament this year.

Speakers at the Reach for Excellence announcement highlighted that recent years have seen numerous major successes for the athletics program, all supported by philanthropy. The men’s and women’s basketball teams both participated in the NCAA tournament this past March. Wrestling and indoor track won ACC championships. Multiple sports set records for wins in a season, including women’s golf, swimming and diving, and soccer. The new Student-Athlete Performance Center opened in December. And a comprehensive overhaul and expansion of the football team’s strength and conditioning area and meeting rooms was unveiled this past March.

Softball catcher Grace Chavez is pictured in the Student Athlete Performance Center. “I think this is a complete next level to everything related to athletic performance,” she said of the facility, which was made possible by a record donation to Virginia Tech Athletics.
Photo by Dave Knachel for Virginia Tech.

Fuente stressed the importance of philanthropy to his team’s ability to win.

“Achieving and sustaining success as a football team begins with attracting the right type of student-athletes, coaches, and support staff to Virginia Tech,” Fuente said. “Then it’s our job to provide all the resources necessary to develop these young men athletically, academically and spiritually to reach their full potential. When those individuals and your entire team trust that you have their best interests at heart, you can push them to achieve goals that can exceed even their own expectations.”

Fuente continued: “We have a responsibility to this university and to this football team to give these young men the resources and support that their peers across the ACC and other Power Five programs currently receive. Our staff is dedicated to helping Virginia Tech reach its objectives on the football field. In turn, we need the investment in this program and its student-athletes to reflect the lofty expectations placed on them. Thank you for your support, and Go Hokies!”

Robertson, whose women’s golf team was recently ranked 16th nationwide, expressed confidence that Reach for Excellence will empower her and other coaches to build programs that win on a national scale.

“Our entire athletics department has a vision to make all sports even better, and the Reach for Excellence campaign will do exactly that,” she said. “It’s big, it’s bold, and it can provide us with the resources needed to be national championship contenders in all sports. I’m confident that our fan base will join in because we need them. Giving isn’t about making a donation — it’s about making a difference.”

Babcock affirmed the aspirations for the future of Virginia Tech athletics, which in the past has had annual operating budgets of roughly $100 million.

“We can either invest in a program that competes for championships across the board, or we can be average,” he said. “Our collective answer is clear: Our investment in athletics should match our aspirations.”

Philanthropy made it possible to renovate the football program’s weight room. “Having one space that has everything we need has brought us together,” said tight end James Mitchell, pictured above. “The facility has had a great impact on that, so we’re grateful for everything that it’s providing us.
Photo by Dave Knachel for Virginia Tech.

As vice president for advancement, Charlie Phlegar heads the university’s fundraising efforts. He stressed the value that Virginia Tech athletics brings to the university, its students, and the wider community that surrounds it.

“When you look at the regional economy, home football games alone bring in up to $100 million per year,” Phlegar said. “And unlike many intercollegiate athletic programs, Hokie sports has a history of providing net positive income to the university. Athletics, particularly the games, are a primary driver of alumni and donor engagement in a way that benefits our academic programs to a great degree as well. Reach for Excellence is a crucial campaign, coming at a critical time for the future of Hokie sports and the national reputation of Virginia Tech. We look forward to working with Whit, the coaches, and our many supporters around the nation, to make sure this campaign is a resounding success.”

Brad Wurthman, senior associate athletic director for external operations, expressed gratitude for the role that athletics has in increasing enthusiasm and engagement from Hokies across the nation and world.

“As we continue to meet and exceed our fundraising milestones, we are becoming better positioned to achieve the vision of Virginia Tech both now and in the future,” he said. “The gifts and engagement that our Hokie Club donors and friends offer are foundational to this effort. We have amazing fans and are extremely grateful for all that they have done. We could not have achieved our results without them, and we will need their support to reach for excellence for years to come.”